Cruise control has long been identified as a tool to enhance fuel efficiency. But the story of Ralph Teetor suggests something else was afoot when it came to helping drivers maintain steady speeds without touching a foot to pedal.

Teetor, who secured a patent for cruise control in 1945, couldn’t actually drive. The future member of the Automotive Hall of Fame lost his sight after a childhood accident and relied on friends like Harry Lindsay to chauffeur him about. As his family told the story, Lindsay tended to slow down as he talked and sped up when he listened. The rides were jerky because of it.

The idea for the first cruise control known as the Speedostat was born. 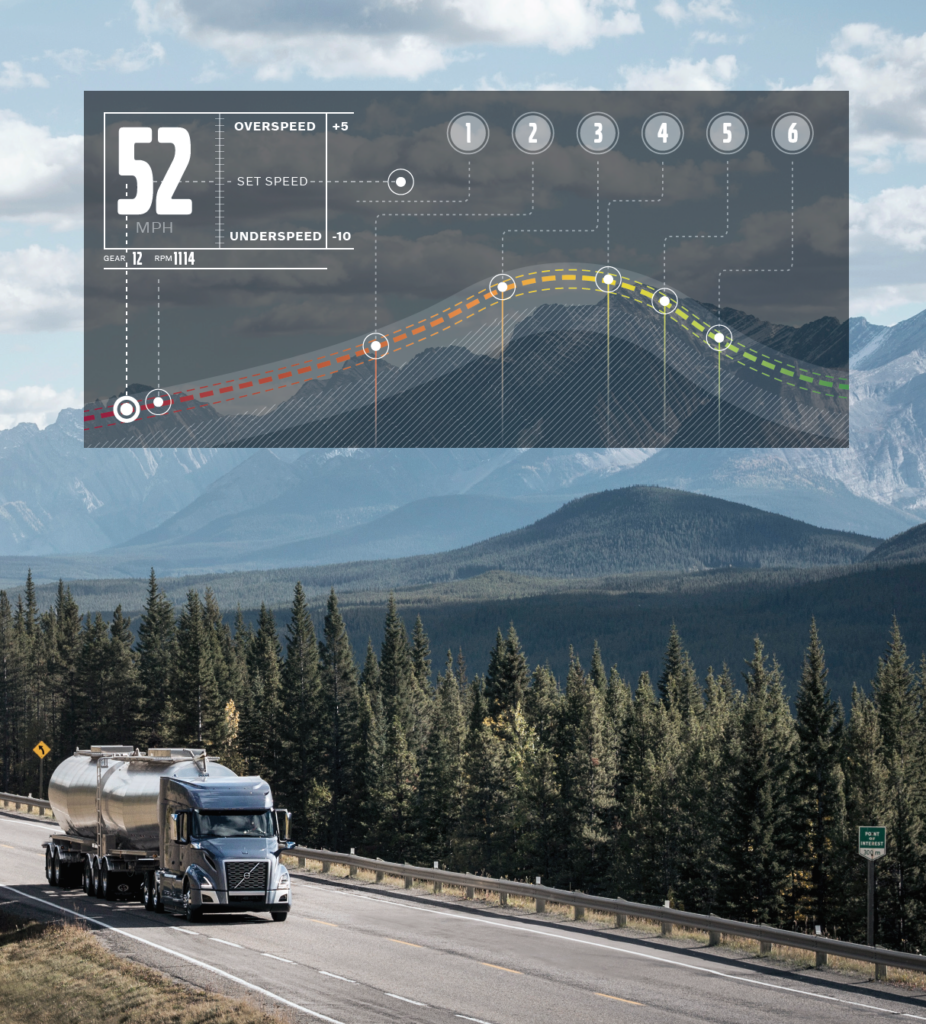 Predictive cruise control adjustments are made based on mapped locations, rather than relying on a one-size-fits-all setting. (Illustration: Volvo Trucks)

Whether the device was inspired by Teetor’s legendary desire for a smoother trip, or restricted speed limits in place during World War 2, the end result offered the added benefit of relatively steady speeds and enhanced fuel economy.

If an engine calls on more fuel to maintain speed during an uphill climb, the setting is still in place as a truck crests the top of the rise. As equipment builds up speed on the downward slope, engine brakes might need to engage to keep things under control. The need for extra fuel emerges once again when the truck struggles up the next hill.

The latest generation of predictive cruise controls has refined the process, basing decisions on GPS coordinates and harnessing the power of kinetic energy like a child pedaling a bicycle.

“You increase the speed going up the hill, and roll out going down the hill,” explains Johan Agebrand, Volvo Trucks North America director – product marketing.

With the precise coordinates and calculations that account for engine loads, the throttle eases just as the truck approaches the crest of the hill, harnessing the vehicle’s momentum across the peak and down the other side. Before hitting the bottom, the acceleration returns to gain some added momentum for the work ahead.

The greatest benefits are along routes with rolling hills, and grades that run 1-4%, Agebrand says.

“In mountainous terrain, there are still opportunities for predictive cruise to contribute (because) new elements like predictive gear shifting and predictive braking have been incorporated.”

It isn’t the only way such systems tap into more than the throttle alone.

“Unlike conventional cruise control, which attempts to maintain a consistent set speed with little variation, IPM (Intelligent Powertrain Management) not only allows the vehicle to increase and decrease speed around the set cruise speed, similar to what you might do while riding a bike, but it also decouples the engine and transmission to coast with the engine at idle running speed in downspeeding/coasting conditions, referred to as E-coasting,” says Leonard Copeland, product marketing manager at Detroit.

Manufacturers differ in their approach to reading the terrain, though. 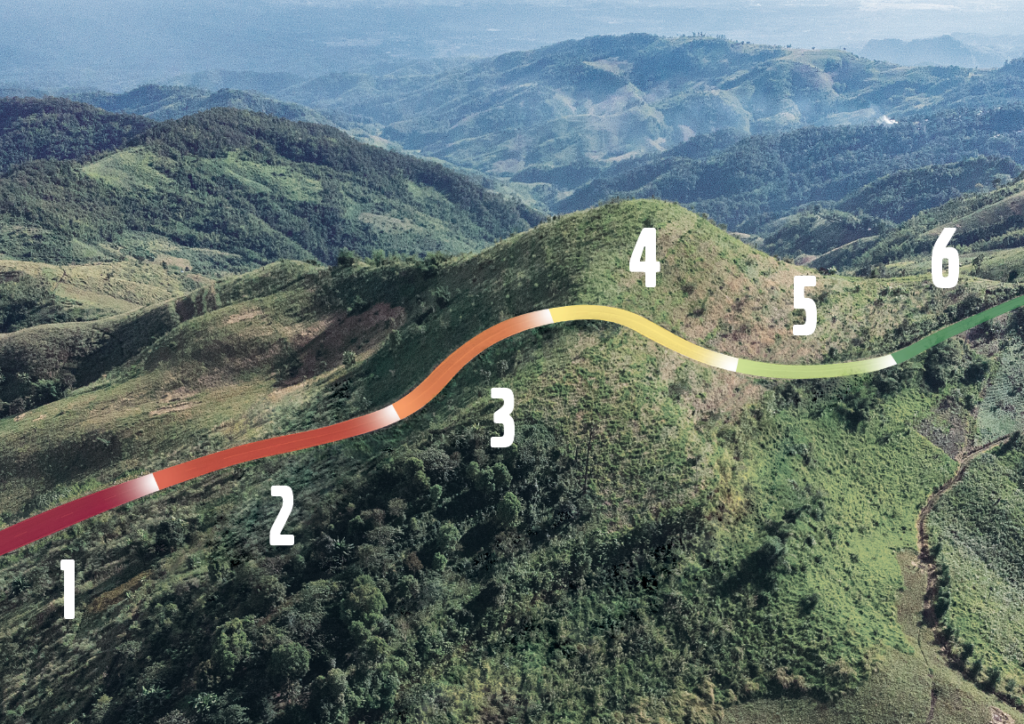 Volvo’s approach involves settings unique to each truck. These are used the next time the vehicle passes the same location. (Illustration: Volvo Trucks)

Daimler Trucks North America and International Trucks, for example, pre-map the territory and hills. Each system update covers more ground than the last. The latest version of Detroit’s IPM includes 35% more roads than its predecessor, offering details on an extra 960,000 km of “slope” miles.

In contrast, Volvo Trucks’ mapping draws on each individual truck’s experience. The predictive cruise control known as I-See matches GPS coordinates to a gradeability sensor in the Volvo I-Shift automated manual transmission, recording loads and road speeds along the way. This data is used to adjust the cruise control whenever the vehicle drives by the same location.

For the drivers equipped with any predictive cruise control, a system’s use might only be noticed by the change in a dash display that shows underspeed or overspeed settings – the speed differentials that need to be reached before adjustments begin.

“You have your engine ECU, you have your transmission ECU, and usually some form of vehicle ECU and your driver information display,” Agebrand says of the overall predictive cruise control systems. “These systems are very, very solid … there’s nothing else can really fail.”

But there are some training needs to consider, in part to ensure that drivers let the predictive cruise control do its job. If the truck is rolling over the crest of a hill a little faster than normal, say by 1-2 mph, that’s normal.

“If you start rolling over faster, don’t go over on the brake pedal,” Agebrand says. An extra economy setting, meanwhile, will let the vehicle slow down a little more heading up the hill.

He describes the process like riding a mountain bike. “Don’t get into the pedal,” he says of the downward journey. “Let the truck do the work.”

Peterson adds that the software itself is further enhancing the action by gently accelerating and decelerating rather than suddenly adjusting speeds. When everything operates the way a driver expects it should, those behind the wheel are more likely to engage the cruise control and achieve the fuel economy benefits.

GPS signals can be dropped, of course. When that happens, the systems revert to a traditional cruise control logic, Peterson says. No driver intervention is required.

But drivers need to understand the limits as well.

“Cruise control operation, while typically being one of the safest driving modes with a full suite of safety features, is not recommended in inclement weather where wheel slip is possible,” says Copeland.

Some routes will also see greater fuel-saving benefits than other journeys.

In a north-south route along the U.S. East Coast, it’s possible to boost fuel efficiency by 1-2% over time. Even on a flat route there’s still going to be a 0.5% savings, Agebrand says, noting the natural grades that vary on any road.

Canadian users may even have a benefit over their U.S. counterparts with such systems. Agebrand says an ideal load would have a gross vehicle weight of 110,000-120,000 lb., admittedly heavier than the 80,000-lb. gross vehicle weights that are more commonplace on U.S. interstates.

Some of the few maintenance needs tend to be traced to the way additional systems are integrated into the predictive cruise controls.

In other words, all of the switches and sensors need to be working upstream. 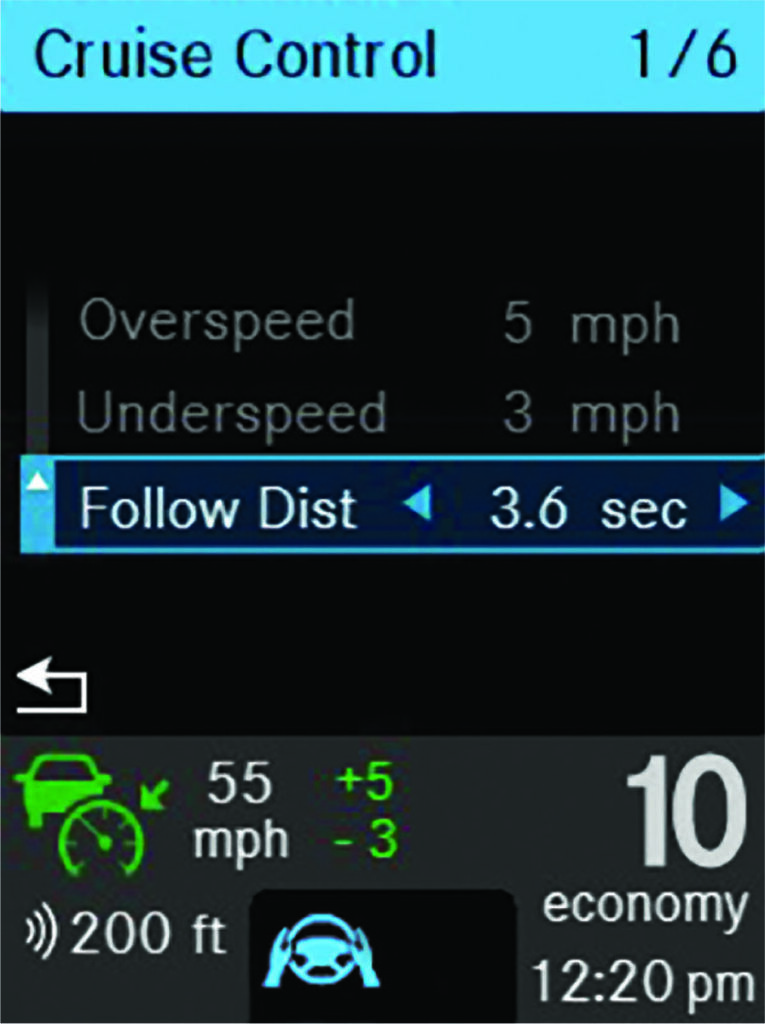 Fleets also have the options of increasing or decreasing set speeds in the name of further boosting fuel economy by adjusting the upper and lower hysteresis values, harnessing more kinetic energy from the hills.

“No matter what the upper hysteresis is set at, the vehicle will not fuel the truck above the set road speed limit,” Copeland stresses.

That option will be a little more restricted in trucks to come, however.

“Decreasing of the lower hysteresis is limited on vehicles built after January 2021 due to GHG Phase 2 regulations,” he says.

It’s just one example of the way the systems continue to evolve.

“Predictive gear shifting and braking are new features that select a gear in advance of vehicle speeds exceeding the programmed limits. Trucks will be able to maintain higher speeds climbing hills and descend hills with better control of braking horsepower and vehicle speed,” Peterson says.

Agebrand, meanwhile, refers to the promise of “big data” and other information that can further refine the decisions.

They’re all steps to mapping future and refined vehicle controls.