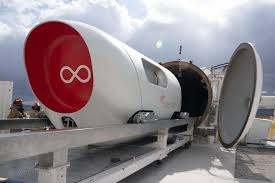 Human passengers have travelled in a hyperloop pod for the first time, eight years after Elon Musk first envisioned the futuristic transport. The maiden voyage took place on a 500 meter section of test track built by Virgin Hyperloop outside Las Vegas, Nevada, and lasted just 15 seconds. Virgin Hyperloop is one of several companies hoping to realize Mr Musk’s vision for a transportation system that combines maglev technology with a vacuum environment to ping people through tubes at more than 1,000km/h. A number of countries have also expressed interest in developing a hyperloop network, including France, India and Saudi Arabia. If successfully rolled out on a significant scale, it will be the first new mode of mass transportation in over 100 years. Hyperloop has four key features: The passenger capsules aren’t propelled by air pressure like in vacuum tubes, but by two electromagnetic motors. It is aimed to travel at a top speed of 760 miles per hour. The tube tracks do have a vacuum but are not completely free of air. Instead, they have low pressure air inside of them. Most things moving through air tubes will end up compressing the air in the front thus providing a cushion of air that slows the object down. But the Hyperloop will feature a compressor fan in the front of the capsule. The compressor fan can redirect air to the back of the capsule, but mostly air will be sent to the air bearings. Air bearings are ski-like paddles that levitate the capsules above the surface of the tube to reduce friction. The tube track is designed to be immune to weather and earthquakes. They are also designed to be self-powering and un-obstructive. The pillars that rise the tube above the ground have a small footprint that can sway in the case of an earthquake. Solar panels on the top of the track supply power to the periodic motors. With these innovations and completely automated departure system, Elon Musk’s dreams of the Hyperloop being the fastest, safest, and most convenient form of travel in the world. Freight Applications of The Hyperloop Following a live press conference organized by the United States Department of Transportation, Hyperloop Transportation Technologies (HyperloopTT) is announcing full support for newly established designations for hyperloop technology in the U.S. During the press conference the US DOT revealed that hyperloop will now fall under the purview of the Federal Railroad Administration, paving the way for funding and regulation for hyperloop systems nationwide. A collaboration between Virgin Hyperloop One, the US-based startup, and Emirati supply chain firm DP World, is looking to shake up the freight industry by using super-fast capsules for land cargo transportation. Called DP World Cargospeed, the venture claims it will be able to “deliver freight at the speed of flight and close to the cost of trucking.” No details of freight prices have been announced thus far. Virgin Hyperloop One CEO Rob Lloyd, calculated a four-day truck journey could be cut to 16 hours. While costs are estimated to run 50% higher than truck transit, Cargospeed believes it can be over five-times cheaper than air freight. The Hyperloop One system is designed for both freight and passenger use. Virgin Hyperloop One is negotiating projects in the UAE, India and Saudi Arabia – all are vying for the first fully-functional line. A route between central Dubai and Abu Dhabi would cut the journey time from a 90-minute drive to 12 minutes. Richard Branson, who became chairman of Virgin Hyperloop One in 2017, cited the growth of e-commerce as the driving factor behind “a dramatic shift in both consumer and business behavior” and to which the delivery business is adapting. Global e-commerce is predicted to grow to a $4.1 trillion industry by close of 2020, and the desire for rapid delivery is becoming an expectation. Lloyd says express delivery for high-priority shipments alone is estimated to become a $516 billion business by 2025. In the announcement, time-sensitive goods such as food and medical supplies were highlighted as items that could benefit from hyperloop’s speed. Renders released with the announcement suggest there are plans to integrate drone delivery into the supply chain too. Dubai has become an incubator for transport innovation in recent years, including a number of autonomous vehicles both on air and land. The combination of speed and cost is set to potentially revolutionize freight transportation between areas with similar landscape as the current railway system occupies. We’re still a few years from a working system but this past weekend’s successful passenger test is certainly encouraging. Stay Safe Everyone. To stay up to date on these and other Logistics topics subscribe to our blog @ http://www.Land-Link.com/blog. AuthorMichael GaughanTechnology OfficerLand Link Traffic Systems