FORT WAYNE, Ind. – Many regional fleets are missing out on the truck fuel economy and environmental benefits made possible by today’s technology. The challenge is making the right business choices – especially when the same truck is used for a mixture of work.

Fuel budgets may not even be at the top of a regional fleet operator’s mind in an environment that emphasizes the frequency and timing of deliveries. 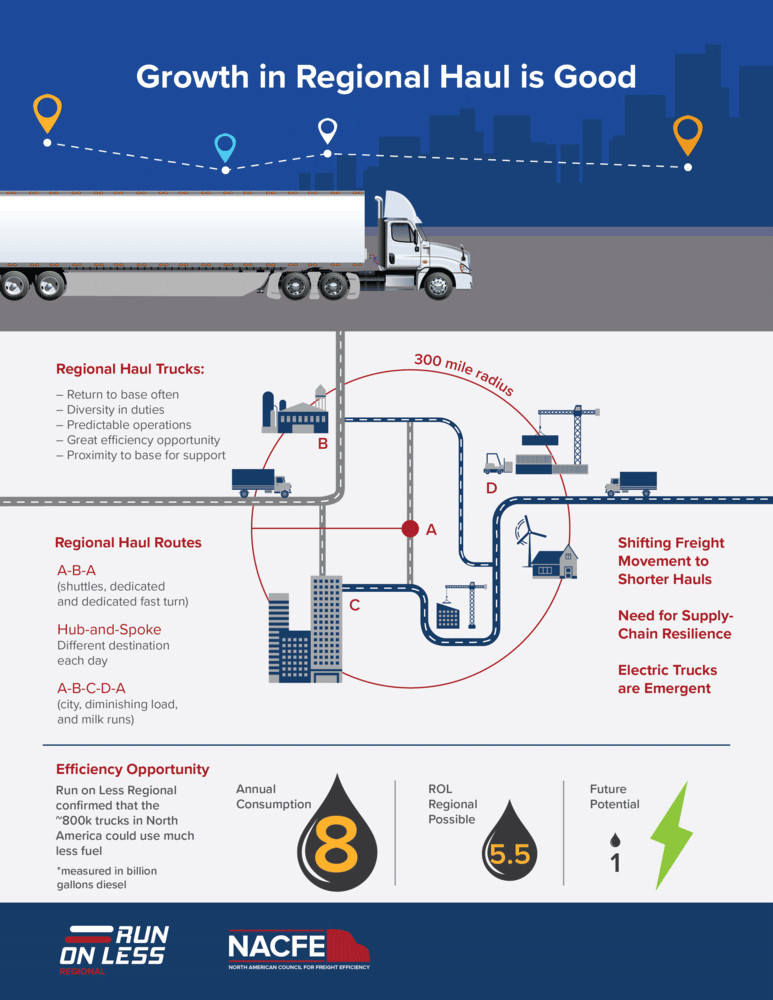 Maybe it deserves to be higher on the list.

The resulting average was 38% better than the typical 6.0 mpg (39.2 L/100 km) that NACFE has recorded for regional truck fleets as a whole. If North America’s estimated 800,000 regional trucks achieved the average seen during Run on Less, fleets would save US $9 billion in fuel and 30.6 million tons of carbon dioxide per year, the council concludes.

According to the American Transportation Research Institute (ATRI), fuel costs averaged around US $0.43 per mile in 2018, accounting for 23% of fleet operating costs. Using the average exchange rate for the year, it would amount to about 35 Canadian cents per kilometer.

The only operating cost higher than that is driver wages.

The details and truck fuel economy

There is a lack of data about the performance gains possible through available technologies, and a lack of confidence about the related benefits, NACFE concludes. The Run on Less – Regional demonstration and its related reports, released earlier today, are meant to help fill the gap.

The trucks used in the Run on Less demonstration covered 58,000 miles (93,000 km) and recorded 237 deliveries to gather their data.

Big data and connectivity can optimize each route, leading to the choices that save fuel, money and emissions, NACFE says. But there are clearly operational differences to consider.

“We want to optimize for the best efficiency,” Roeth says, “but we do recognize some of these trucks will be used in different duty cycles.”

The council itself divides regional hauling into no fewer than seven distinct duty cycles, including shuttle, dedicated, dedicated fast turn, hub and spoke, city, diminishing loads, and milk runs. Those different duty cycles can even apply to individual trucks. A UPS vehicle, for example, might complete fast turns during the day, but deal with diminishing loads during a night shift.

Mixed work like this means that trucks dedicated to fast turns may not be perfectly spec’d for time on the highway.

“Even in these dedicated fast turns, they design more of a vanilla truck,” Roeth says. Southeastern Freight Lines, for example, doesn’t use fuel tank skirts because many of the trucks eventually end up on city runs.

But there are opportunities. The UPS truck in the demonstration fleet still relied on gap closures in the name of better aerodynamics. Trucks with diminishing loads might benefit from other gearing, hybridization, automated manual transmissions, and customized powertrains, Roeth adds. Those that head out with a gross vehicle weight of 80,000 lb. but come back empty might benefit from a lift axle on the tractor or trailer.

In the meantime, the role of regional haulers continues to grow, especially during Covid-19.

“This whole pandemic has opened our eyes and reminded us how important regional haul is,” Roeth says, referring to the way empty grocery store shelves reinforced the importance of the work.

“They’re here. They’re coming,” Roeth said of electric trucks. “They are proving their worth.”

Dig into the individual operations, though, and there are still barriers to electrifying some of the routes. The Hirschbach truck used in the Run on Less demonstration completed 140-mile (225-km) round trips, well within the range of today’s battery-electric vehicles. The challenge is that it made three such turns per shift.

Says Roeth: “It’s all in the details.”

And for now, some regional fleets continue to look for fuel economy gains, even though the options may require some extra study to find the perfect fit.

“Hirschbach is top-down focused on making our footprint greener and minimizing our carbon emissions,” said Nick Forte, the fleet’s vice-president of maintenance/equipment. “In this tumultuous business environment with uncertainty lurking around every corner, this [Run on Less] program has energized our efforts to stay the course.”