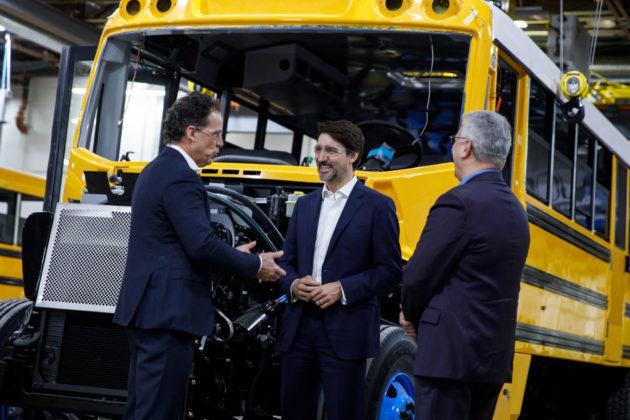 SAINT-JEROME, Que. – Prime Minister Justin Trudeau made a point of demonstrating his interest in electric vehicles yesterday, in a visit to Lion Electric’s assembly plant in Saint-Jerome, Que., north of Montreal.

The visit is being described as a “courtesy call” by the company, which manufacturers battery-electric school buses and Class 8 trucks.

In 2018, the federal government invested $50,000 in Lion Electric research and development activities. Trudeau said this kind of collaboration is part of a series of measures aimed at “achieving ambitious goals that will reduce our emissions, create good jobs and move faster towards a cleaner future.”

In a brief speech, Trudeau highlighted the contributions of Canada and Quebec into electric vehicles, which he called “the economy of the future”.

The Mining Association of Canada reacted the same day, saying it was delighted with the announcement it described as “electrifying” for its members.