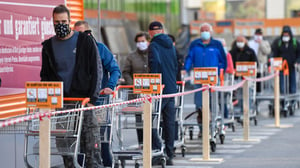 While health experts have expressed doubt of America’s readiness to “open up” the economy, it is clear that elected representatives are putting the wheels in motion towards that end. The speed that states gear up to reopen will vary, but like it or not, the current stage of the economic shutdown will end soon. When analyzing the economic effects of this shift towards opening there are three things to consider: the conditions under which the economy will open, how the inevitable recovery will look and, finally, identifying sectors of the economy that will return sooner than others. Conditions for opening the economy For the economy to open, three conditions need to be met: That health systems across the country have the capacity to deal with a rise in new coronavirus infections. The rate of infections, hospitalizations and deaths must be declining. Testing capacity needs to be strong enough to quickly isolate potential carriers America appears to have achieved the first and second conditions, but not the third. Currently, the US is conducting just over one million tests per week. While this sounds like a lot, it’s thought to be roughly one-half to one-third of what’s needed, though there is time to get this right. Overall, people feel pretty good about how the country will handle opening up after an extended and exhausting economic shutdown. The reason is because America was quite successful in quickly shutting the economy down in a relatively decentralized way. We can see this in motor gasoline demand: over the last four weeks, gasoline demand has cratered an unprecedented 49%. Folks have responsibly heeded the calls to social distance. Thus, the assumption that people would be reckless as life slowly returns to normal is flawed. What Will the New Economy Look Like For now, the lack of widespread testing capacity means that the US economy is not going to be anywhere near full strength coming out of the gates. In fact, a significant percentage of employers will likely designate some employees permanent work at home personnel. A similar percentage of positions will not return, at least this year. Given the gradual nature of the economy opening up, we should expect a gradual recovery. As more things open, growth should improve sequentially. After all, once you’ve hit bottom, it’s hard to go lower. Whether its airlines or dine-in restaurants, many service industries have seen traffic go to zero. Anything will be better than what we have right now. As more industries come online and as our health system gains the experience in dealing with the coronavirus, it’s reasonable to expect growth to continue improving. It is of course possible that the virus rears its ugly head again in the fall, short circuiting any recovery and forcing parts of the country to shut down after just opening up. A second outbreak will force the entire country to shut down again, but wide-scale testing should ramp up by then. Finally, what industries come back first? It’s best to look at the industries that shutdown last. The goods producing sector looks like the natural selection. Manufacturers will ramp up production to restock inventories and revive the economy. Implementing best practices with respect to social distancing and sanitization of the workplace seems much easier to do on a factory floor than in a restaurant or concert hall. This is not an industry that requires a high degree of physical contact with the end consumer. As we carefully re-open, many businesses may not survive or may spend many quarters on life support. Social distancing rules will have a profound affect upon restaurants, bars, buses, trains and airplanes. Filling every other seat will not be profitable in the long run but will be necessary for some time to come. A second wave of Covid-19 could be even more devastating to the domestic economy of the United States. Stay Safe Everyone. To stay up to date on these and other Logistics topics subscribe to our blog @ http://www.Land-Link.com/blog. AuthorMichael GaughanTechnology OfficerLand Link Traffic Systems