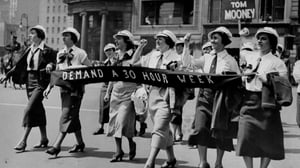 Labor Day pays tribute to the contributions and achievements of American workers and is traditionally observed on the first Monday in September. It was created by the labor movement in the late 19th century and became a federal holiday in 1894. The first Labor Day celebration was September 5, 1882 in New York City. On that Tuesday, 10,000 citizens marched for labor rights down the streets of Manhattan. During this time the average American worked 12 hours a day, six days a week. It wasn’t until the Adamson Act passed on September 3, 1916 that our modern eight-hour work day was established. The Theory About Why We Can’t Wear White After Labor Day Is Highly Debated. There are three hypotheses about the origins of the “no white after Labor Day” directive. The first theory, disagreed upon by many, is based on class distinction in the early 1900s. Although white clothing was clearly an upper class luxury, after the Civil War it became harder to distinguish women coming from old money or new money. The higher class ladies then made inane fashion rules to weed out those who were “out of place.” The second theory speaks to a more practical approach by pointing out that Memorial Day and Labor Day bracketed the summer season, and therefore lighter, summery, white clothes were no longer needed. The last theory has to do with popular fashion magazines, who may have begun promoting fall clothing after Labor Day, and the trend was picked up. Labor Day Is The Second Most Dangerous Holiday Weekend To Drive On U.S. Highways. According to CBS News, there were 308 casualties over Labor Day weekend between 2011 to 2015, following closely behind Memorial Day’s 312 casualties. These particular holidays designate the beginning and ending of summer, where excitement is heightened, and young people tend to be more reckless on the road. These statistics apply to truck drivers as well. Crowded roads and impatient drivers are a dangerous combination to an 80,000 pound semi. Please drive carefully and arrive safe. Holiday Weekends Are Prime Time For Cargo Theft Cargo theft is the primary concern of shippers and logistics professionals over any national holiday weekend. Holiday weekends pose a higher threat because truckers will park their trucks, and warehouses will be shut for an extended period of time. Millions of dollars are lost, production schedules disrupted, and customers disappointed over the long holiday stretch. Targeted commodities of Labor Day crooks are tobacco, pharmaceuticals, personal care products, home and garden supplies, and electronics. Cargo security experts say cargo thieves attempt to exploit cargo at rest. It suggests carriers and drivers confirm receivers’ hours of operation for the holiday weekend and plan for secure parking locations in the event a shipment will have to stop for an extended period of time. Covert GPS tracking and active monitoring of high-value shipments are highly recommended. Yes, Labor Day is the “unofficial end of summer” and the end of hot dog season. But it is also the beginning of NFL season—almost every NFL kick off game has started the weekend after Labor Day. Labor Day is the end of white pants but the beginning of black pants… and it’s also, unfortunately, the end of three-day weekends until November. Stay Safe Everyone. To stay up to date on these and other Logistics topics subscribe to our blog @ http://www.Land-Link.com/blog. AuthorMichael GaughanTechnology OfficerLand Link Traffic Systems