VANCOUVER, B.C. – With the United Truckers Association (UTA) accusing the Office of the B.C. Container Trucking Commissioner (OBCCTC) of ignoring the off-dock rate table, commissioner Michael Crawford says the situation is simply beyond his jurisdiction.

The issue revolves around how there has been an increase in unlicensed carriers performing off-dock work at lower rates set the OBCCTC. The UTA has claimed that the OBCCTC is intentionally ignoring this situation, resulting in licensed operators losing work due to the lower rates being charged by their unlicensed counterparts.

But Crawford says there is nothing he can do to regulate rates for off-dock work performed by unlicensed companies because he has “jurisdiction over some things and not over other things.”

Under the Container Trucking Act and Regulation, as well as a set of regulations that underpin the act and the licenses issued by the OBCCTC, any trucking company that requires access to container terminals in the Lower Mainland need to have an appropriate license. Any licensed operator is then required to adhere to the rate table set by the OBCCTC, which differ for on-dock and off-dock work.

However, if a company does not require access to container terminals, they do not need to be licensed, and can perform off-dock work. This means the unlicensed company does not fall under the OBCCTC rate table, and can essentially pay whatever rate they want.

“The UTA isn’t wrong pointing out that there has been a growth in unlicensed off-dock activity in the Lower Mainland,” admitted Crawford. “We don’t regulate it or audit it. I couldn’t tell you what drivers are getting paid for that work…we simply have no jurisdiction over those unlicensed companies that do that work.”

Adding to the issue, Crawford said, is that the UTA does not agree with his assessment of the act, as they have a different view and believe the commissioner does in fact have jurisdiction over unlicensed companies doing off-dock work – and even if he doesn’t, he should.

Crawford is adamant he does not have jurisdiction over off-dock work performed by unlicensed operators, saying the UTA is trying to enter into a legal debate that argues the commissioner already has this type of jurisdiction, but says he is “on very strong footing” that he does not.

Crawford even points to a series of recommendations he submitted in April 2019, where he underscores this very issue.

In the first of 12 recommendations, Crawford says to amend the Container Trucking Act and Regulation to clearly capture those companies that are currently affiliated with licensees and are hauling containers from point to point within the Lower Mainland but are not paying the regulated off-dock rates.

The commissioner believes some would like to see an all-in option, where there is a blanket rate for any work being done involving container trucks on- or off-dock. Crawford’s recommendation is to moderately expand the OBCCTC’s scope, but not to the extent some would like.

“I very much see the purpose of this office and the intent of the act to be one around ensuring free-flowing trade and productivity at the terminals,” said Crawford, “and part of that is making sure that rates are not undercut for the drivers who support that work.”

The trick is to come to a decision on what work counts toward that purpose.

“If it’s an off-dock move that can be related back to an on-dock move – in other words, a supporting movement, ancillary to the eventual on-dock movement – then I think there is a case to be made for an applicable regulated rate,” Crawford said. “If it’s something that is distinctly outside that eventual marine container activity, then no, I don’t subscribe to the notion that we should have regulated rates for everything.”

TruckNews.com reached out to the UTA, but have not yet received a reply. 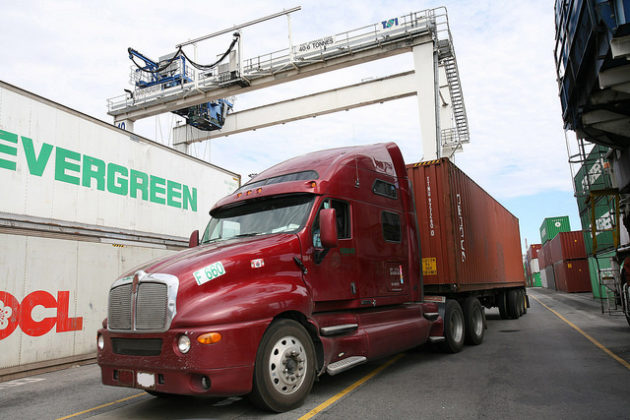