Say what you will about the importance of training, but mechanics still need access to the right tools to get the job done. Here are seven tools that no shop should be without – and what to look for when selecting them. 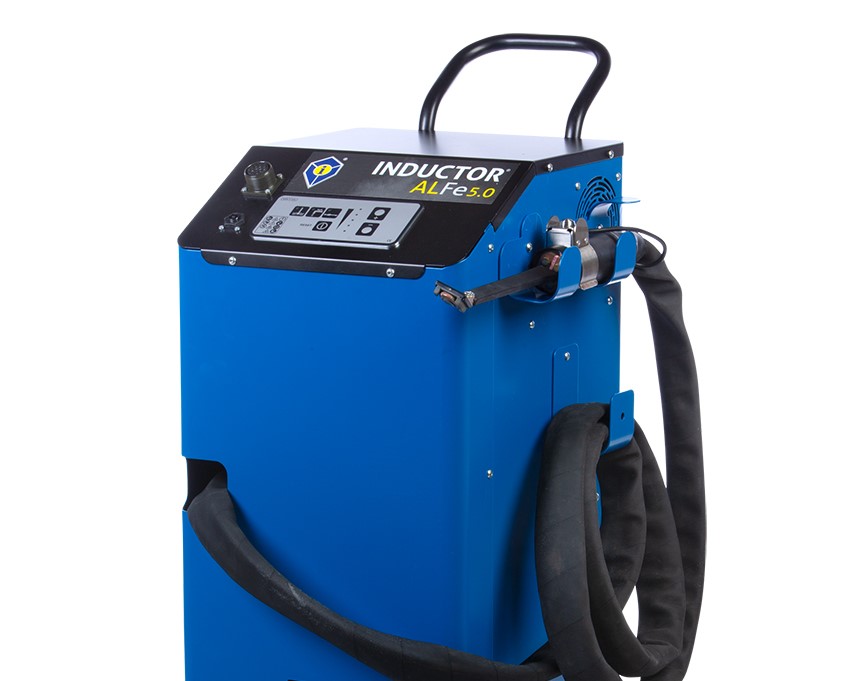 Gone are the days when a torch is the preferred method for releasing seized parts. There is a better way, and it doesn’t introduce the risk of burning the shop to the ground.

“A lot of companies are requiring a different source of heating, and using no torches,” says Norbert Jillich, national sales manager for Induction Innovations, a maker of induction tools for 20 years. “You don’t have the collateral damage.”

In contrast, a torch can cause plenty of issues when sparked next to brake, fuel or electrical lines, and have been known to lay waste to rubber bushings.

Portable units, which involve wrapping coils around parts, can be enough for smaller jobs. But the wands connected to the larger equipment also come with attachments such as a glass blaster to remove glass or bedliners, and a pad that can remove things like vinyl graphics.

Stick pressure gauges are carried about in tool boxes and pockets alike, but shops that deal with high volumes of tire work will want something that is more accurate. The choice can even play a role in workplace safety.

“A big question to ask is, do you want a gauge that is attached to your compressor to correct the tire pressure,” explains Usman Mir, Kal Tire’s zone manager responsible for shops between London, Whitby, and Barrie, Ont.

The Kal Tire shops want six feet of hose between the valve stem and the digital tire gauge, which is mounted near the trigger to activate the air. This, Mir explains, ensures that workers are standing outside the “trajectory zone” in case a tire blows.

The digital versions tend to be more accurate than the dial gauges as well, although even these units need to be monitored. “We’ll check ours daily,” he says. “The industry standard is once a month at least.” But if the tools fall within 1% of the desired pressures, there’s no need to change them.

While some shops have dedicated testing systems for these regular inspections, another option is simply to compare multiple gauges against one another. “If they’re all within 3% of each other, you can say they’re all good,” he says.

As for the air that flows through the line, Mir stresses the importance of checking that as well. Kal Tire drains the tanks every night, and takes advantage of inline air-water separators.

“Even your air chucks last longer without the moisture in there,” he says, referring to the added layer of protection. 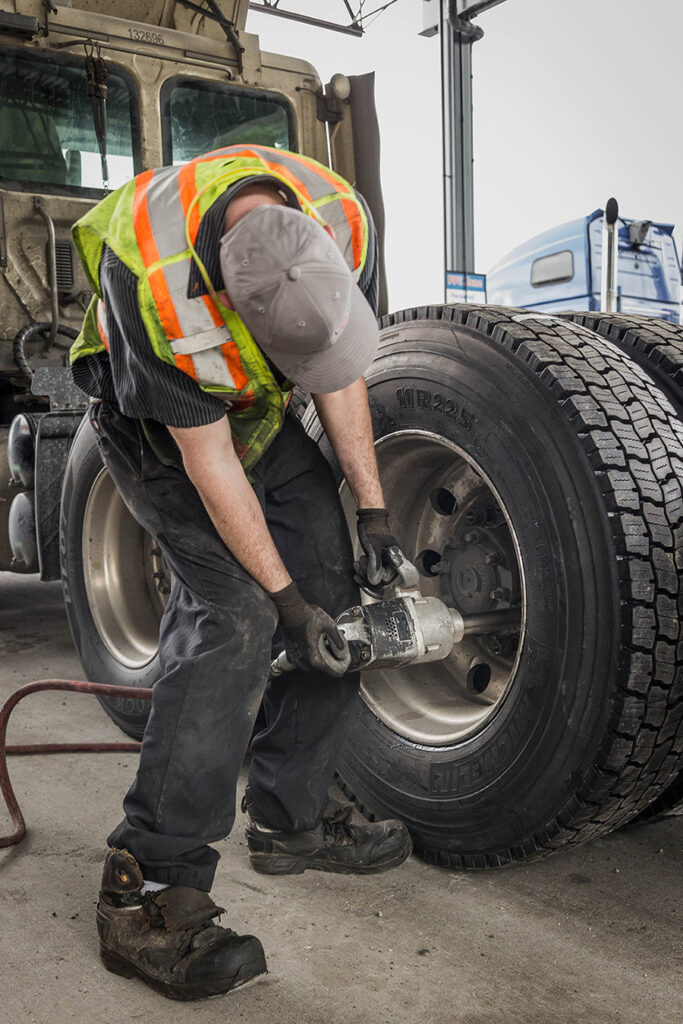 Impact guns are designed for speed and efficiency, but when it comes to applying the proper force to a wheel end fastener, there’s no beating a calibrated torque wrench.

“It’s a precision tool,” Mir says, stressing the value of name brands when it comes to finding a tool that will last. Some of Kal Tire’s torque wrenches will fasten up to 100 nuts a day, after all.

As for the choice between versions that fold or click when reaching the required torque, he says that’s a personal preference. No matter what, though, they should be sent out once a year for recalibration.

It’s important to remember that impact guns could overtorque a wheel, Mir adds, referring to forces that can reach 800 lb-ft. Kal Tire technicians are encouraged to use the lightest settings when installing the wheels, and limiting the higher forces to the removal process.

One of the cheapest tools on this list comes in the form of a tread depth gauge, but the handy measuring device encourages technicians to put their hands on tires, and can help to spot early signs of uneven wear. 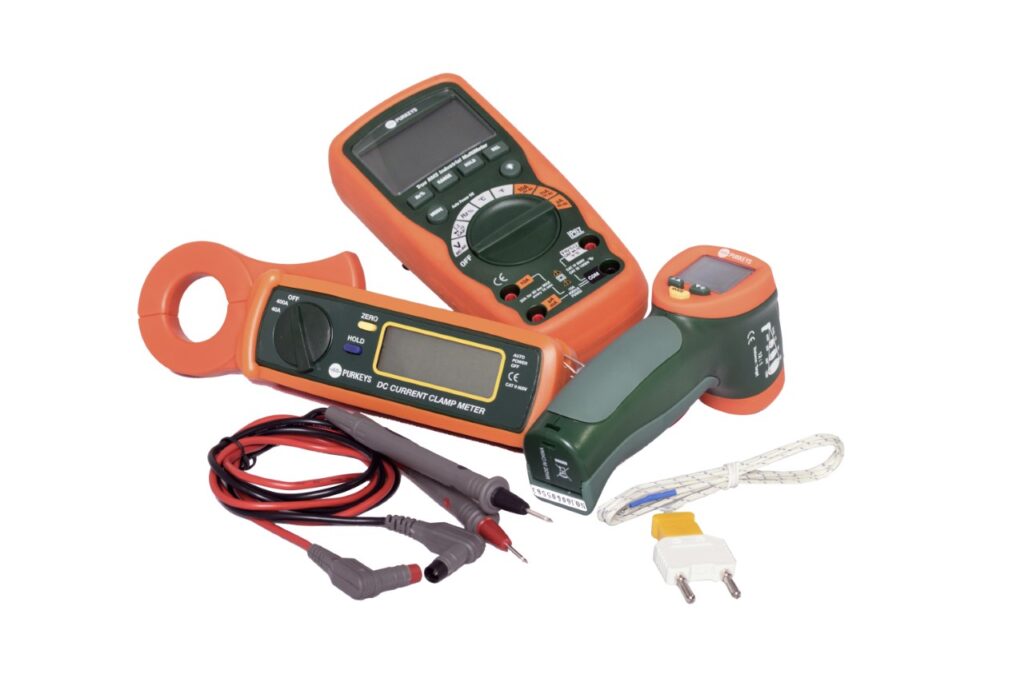 Are you checking wires with a probe that pierces the protective jacket and insulation? Throw it away. As small as the holes seem, they create a path for water and corrosive de-icing chemicals. And once the corrosion begins to wick up the wire, any number of nightmares can begin.

As bad as the situation can be with 12 volts, the challenge will intensify as vehicle systems increase to 24 or 42 volts, says Larry Rambeaux, a sales application engineer at Purkeys Fleet Electric. Those wires will be smaller and lighter, but will corrode more quickly.

For those who perform electrical work, the go-to testing tool is a multimeter. But not all models are created equally. Analog multimeters show changes and voltage in real time, but are difficult to log. And while most models will measure both voltage and current, there’s also resistance, continuity, and frequency to consider.

“It’s got to be digital. They’re never going to be able to read an analog [model],” Rambeaux says. A unit with automatic ranging will also help to ensure accurate measurements.

Still, while a multimeter is a key tool for troubleshooting issues like corroded and damaged wiring, it will only be useful with the training that steers techs away from common mistakes. “In order to have voltage drop, you have to have current flow,” he says as an example, referring to misleading readings that can occur when a trailer’s seven-pin connector is unplugged before measuring the voltage.

For a heavy-duty shop, Rambeaux recommends a multimeter that will handle 1,000 volts AC and DC, and 20-40 Mega ohms. A unit that offers frequency, hertz, and pulse width modulations will also be valuable when dealing with increasingly complex electrical systems.

“You’ve got to buy the multimeter that you need,” he says.

Sure, the multimeter will measure amperage, but what if you’re testing a liftgate charging system and need to measure voltage and amperage at the same time? The best solution for that is to have a small clip-on or inductive ammeter, Rambeaux suggests.