According to the 31st Annual Council of Supply Chain Management Professionals (CSCMP) State of Logistics Report, logisticians received high marks and mostly praise for their responses to the economic trauma caused by the worldwide COVID-19 pandemic. However, they’re now going to have to step up their game to adjust to changing realities on the ground, sea and in the air.

According to the report, logisticians and other transportation experts were “initially traumatized,” but ultimately “proved resilient” as they adapted to the COVID-19 pandemic and ensuing economic upheaval.

The annual report, released on June 22 and authored by Kearney in partnership with CSCMP and Penske Logistics, is predicting that the “shocked U.S. economy will shrink this year, but the adapting is already under way as logistics professionals adjust to new realities of transport planning and execution.”

Despite the sudden economic shock that began in March and continued through the second quarter, the report says that the U.S. economy is bouncing back somewhat strongly and e-commerce “continues to boom”—a huge benefit to the large parcel giants and some nimble trucking companies.

And somewhat surprisingly, the report concluded, trucking companies often prone to deep discounting during any economic downturn, have stuck to their newfound pricing discipline while largely avoiding rate wars of the past. “Some carriers maintained profits despite declining volume in 2019, suggesting a commitment to pricing discipline that may help them survive the bigger drops of 2020,” the report states.

There’s also a newfound unevenness to the economy, including logistics. “Some carriers may face bankruptcy; some shippers may face higher prices; others may welcome abundance,” the report predicts. “To get through trying times, all parties will need to make smart investments in technology and use such technologies to deepen collaboration.”

So, let’s take a deeper dive into how logistics is faring during the pandemic-induced economic slowdown. We’ll see which sectors and modes were most affected and how various modes and shippers adapted to the largest health crisis in 100 years—and the sharpest economic downtown in our lifetimes. 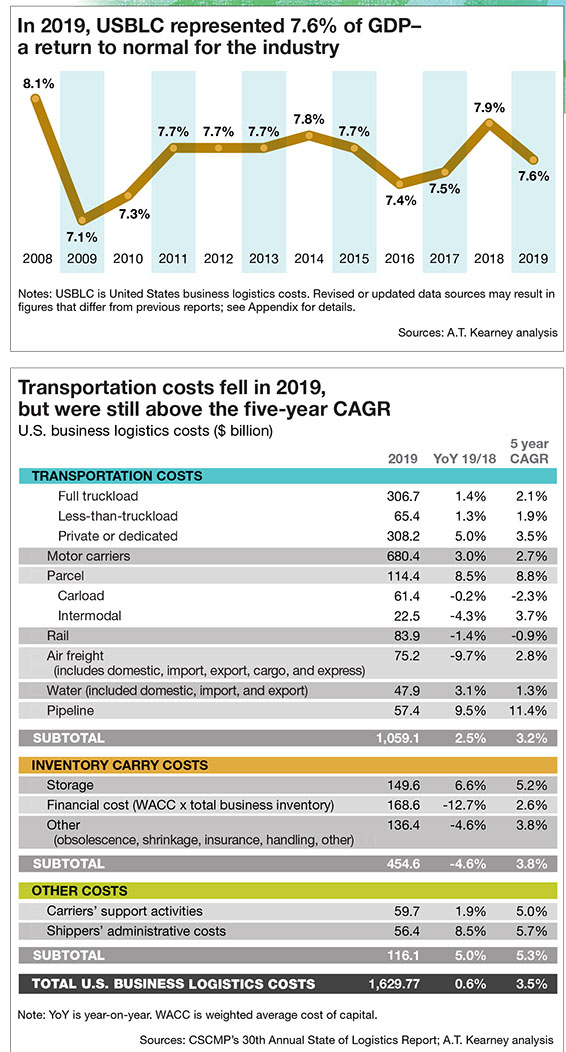 The new report offers mostly glowing reviews of how logistics managers coped with decimated supply chains and uneven logistics demand during the pandemic’s early days. It says that logisticians responded to the crisis “often with prescience, efficiency, and a dollop of charm” in stepping up to help provide the nation with critical supplies.

But the report authors warn that the size, shape and timing of a future economic recovery all remain in question. Whether the recovery is a fast V-shaped, slower U-shaped, or an even slower “Nike swoosh” is open to debate among respected economists. For what it’s worth, most economists surveyed in the report expect a U.

Oxford Economics, a consulting firm, is predicting a 7% decline in U.S. real GDP this year, followed by an 8.6% rebound in GDP growth in 2021. The International Monetary Fund predicts a 5.9% drop this year followed by 4.7% growth next year. Whatever plays out, it’s clear that the COVID-19-induced coma ended 126 months of economic growth—the longest economic expansion in U.S. history.

According to Michael Zimmerman, the report’s author and Kearney partner: “Nobody is certain what the future will look like. But it’s fairly certain that supply chains and logisticians will focus on resilience—that means more options.”

The report also predicts that some carriers—without naming any—may face bankruptcy, while some shippers may face higher rates. “To get through trying times, all parties will need to make smart investments in technology and use such technologies to deepen collaboration between carriers, shippers and third-party logistics providers (3PLs),” writes Zimmerman.

“Anything is possible given that nobody could have foreseen an event such as a worldwide pandemic,” says Mark Wallace, executive vice president of sales and marketing for CSX. “The rail industry held up pretty well despite a 20% to 25% drop in volumes. The rail industry is strong enough to withstand any further impacts.”

Parcel and last-mile deliveries—mostly by UPS, FedEx and U.S. Postal Service—enjoyed an 8.5% jump in year-over-year revenue in 2019 to $114.4 billion driven by the e-commerce boom and “significant innovation,” the report says.

Rail was down 1.4% to $83.9 billion in 2019 driven by declining volumes, especially in intermodal that dropped 4.3% to $22.5 billion. Declining coal demand as well as a shift to over-the-road trucking took a bite out of rail revenue, according to the report.

Air cargo was the biggest modal plunge, dropping 9.7% to $75.2 billion as the sector faced slowing industrial volume, especially in the automotive sector. In the meantime, water transport grew by 3.1% to $47.9 billion as “pricing discipline kept rates healthy,” according to the report.

Inventory storage costs jumped 6.6% as warehousing capacity remained tight. The warehouse sector delivered the highest square footage completed in a single quarter on record, “and the market quickly swallowed it up,” state the report.

As part of the panel of experts convened for the release of the report, Marc Althen, president of Penske Logistics, confirmed that his company is seeing increased activity in warehousing requests. “Customers are starting to move away from large DCs in the middle of nowhere to closer to urban areas,” he noted.

The report also found that there were additional higher costs across the board as well. Shippers’ administration costs rose 8.5% to $56.4 trillion, a reflection of a tight overall labor market prior to the economic slowdown, resulting in higher wages during 2019.

The pendulum swings to shippers

Trucking, the engine that drives the U.S. logistics market by hauling about 70% by value of all freight, gave up some of its pricing power to shippers over the course of 2019. After two years of tight capacity and higher rates in 2017 and 2018, the over-the-road truck market balance “tipped in favor of shippers” last year, according to the report.

This, in turn, has ignited a technology war among carriers. The larger ones are “looking to technology investments that promise to raise efficiency,” according to the report. “Smaller carriers, especially those in highly affected industries, must look to app-based solutions and brokers to provide access to better fit routes and backhauls.”

Jacqueline Bailey, North American regional lead for Cargill Transportation & Logistics and a member of the expert panel, says that her company is implementing more “virtual customer training sessions.” The purpose is more transparency and openly sharing best practices. “We’re starting to share what our needs are and how we can get better,” she says. “Those conversations have been very powerful and can add to the resilience of our supply chains.

The 31st Annual State of Logistics Report also issues a gentle warning to “normally unflappable” logistics leaders accustomed to fluctuations, volatility and crises. The COVID-19 pandemic has “violently wrenched” supply chains worldwide, and logistics professionals have to prepare for the next upheaval as well.

Simply put, say the report’s authors, logistics and supply chain managers can no longer afford to put all their eggs in one supply chain basket—for example, China’s basket. They need to build in more options and “suppleness” to their supply chains.

Additionally, U.S.-China trade tensions under the Trump administration are “unlikely” to abate in the near term, say the authors, and those underlying geopolitical tensions will only “accelerate” the push toward “reshoring and multi-shoring” supply chains.

“The pendulum that once swung toward ultra-efficient, single-source, just-in-time, and heavily cost-focused supply chains will swing back in favor of flexibility and reserve capacity to cope with uncertainty and risk,” predicts Zimmerman. “The pandemic starkly brought this to life.”

Cargill’s Bailey agreed, and says that her company, which operates in 70 countries, is already preparing contingency plans, as maintaining agility throughout the supply chain is a new emphasis. “Where we do have bottlenecks, we definitely are looking for alternatives,” she says. “We want redundancies. We have begun to diversify away from single-source providers, and there’s now a bigger focus on how to manage past this disruption.”

Report author Zimmerman says Kearney is “definitely” seeing clients implementing diversification away from China and other low-cost, low-wage countries. “This had been happening prior to the pandemic,” he says. “But this is hitting the C-suite as a priority and we’ve seen that continuing.”

Additionally, the report adds that although few could have predicted this economic crisis, carrier and shipper behaviors have “almost universally” been described as exemplary with a we’re-all-in-this-together mantra.

“Logisticians rolled up their sleeves instead of hiding behind their contracts,” the report concludes. “People across this industry—indeed, across the world—are coming together to face this dramatic crash and rebuild from it.”

About the Author John D. Schulz

John D. Schulz has been a transportation journalist for more than 20 years, specializing in the trucking industry. John is on a first-name basis with scores of top-level trucking executives who are able to give shippers their latest insights on the industry on a regular basis.