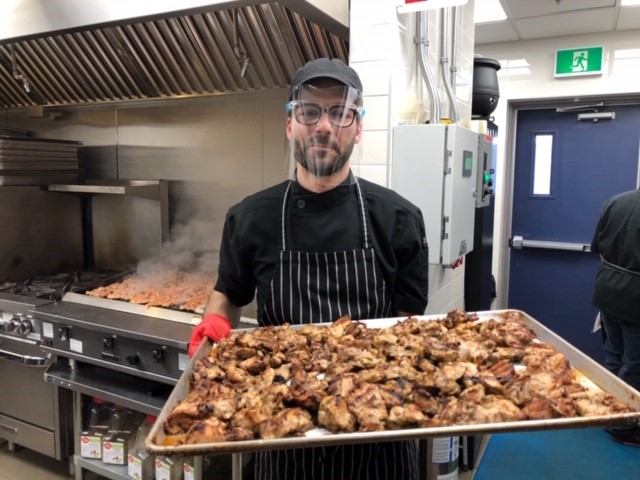 When Generations Diner in Windsor, Ont., was force to close down due to the Covid-19 pandemic in late March, owner Jessica Knight-Moodrey and her mother Vikki Knight wanted to ensure their food inventory wouldn’t go to waste.

Vikki, who often traveled with her late husband who was a longhaul trucker, had heard that drivers were having difficulty getting meals while on the road.

“I have a lot of trucker friends in my circle and I was hearing it was difficult for them to get food,” Knight told Today’s Trucking.

Knight and her daughter decided they’d cook up their remaining food and offer free meals to truckers. The first day they prepared pasta dishes, the next day it was sandwiches, then macaroni salad, soups and chili.

“It started off as something we were going to do with the leftover stuff in the restaurant,” said Knight. “When we realized there was going to be a really big need for it, we decided we couldn’t stop.”

Generations Diner began taking food donations from the community and now prepares free meals for truck drivers twice a week, served Wednesdays and Thursdays from 1-7 p.m. on the side of County Road 46, where volunteers wave signs declaring: Food For Truck Drivers.

Generations Diner’s initiative to feed truck drivers is one of many that has taken place right across Canada, after reports drivers were struggling to find food while delivering the goods vital to keeping grocery stores stocked and the economy moving.

Truck stops across North America have been forced to close dining areas, and in many cases limit selection as the virus has spread and social distancing has been enforced by state and provincial governments.

Blackjack’s Roadhouse in Nisku, Alta. – one of the largest truck stops in Western Canada – shut down completely in March.

“Food has changed. Most fast food facilities are open through the drive-thru. I’m missing having real food at a dinner.”

For Jamie Hagen, owner of Hell Bent Xpress in Aberdeen, S.D., who hauls regularly into Canada, getting healthy meals on the road was becoming increasingly difficult.

“Food has changed,” he acknowledged. “Most fast food facilities are open through the drive-thru. I’m missing having real food at a dinner.”

“As the nation confronts the coronavirus outbreak, the country’s travel centers and truck stops are committed to remaining open and serving America’s drivers,” said NATSO CEO Lisa Mullings. “Fuel retailers are ‘essential’ businesses that must remain open even if other ‘non-essential’ businesses are forced to close.”

The announcement came as the U.S. Federal Motor Carrier Safety Administration (FMCSA) ordered truck stops to remain open 24 hours a day to give truckers a place to rest, fuel, and eat. 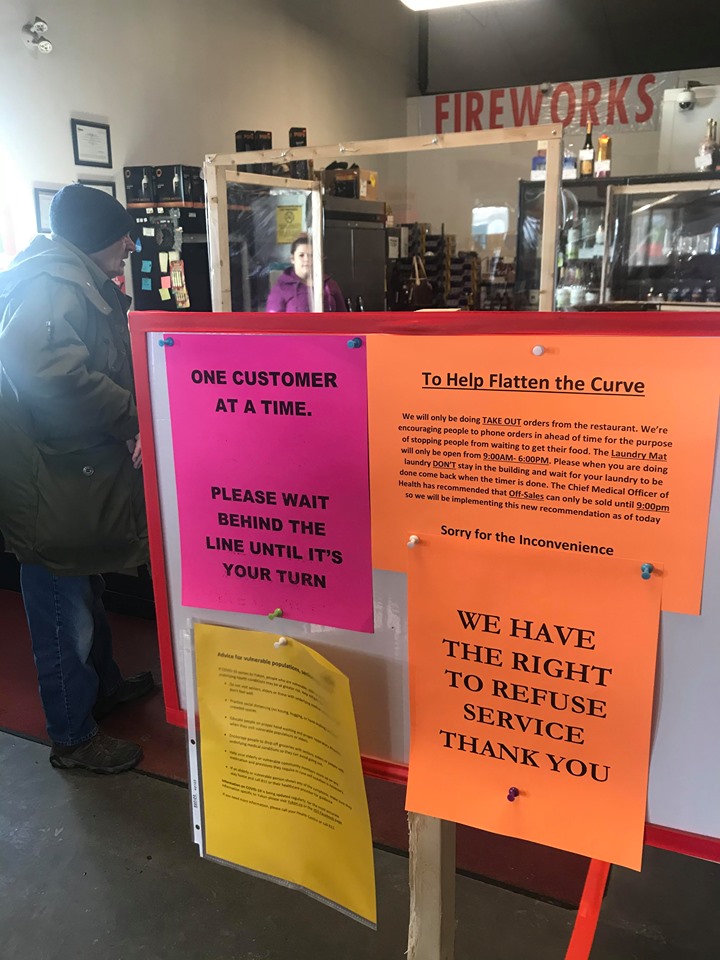 “In the coming weeks and months, it will be critical that these businesses remain open, 24 hours per day, providing America’s truck drivers with fuel, food, showers, repair services, and opportunities to rest,” FMCSA’s acting director Jim Mullen wrote to truck stop operators in mid-March.

NATSO acknowledged some states have ordered the closing of sit-down restaurants, but that travel plazas continue to offer other food options, including quick-serve and healthy grab-and-go options. Some truck stops are modifying their dining areas to provide take-out options.

Pilot Flying J locations have remained open to commercial drivers. The chain has more than 780 travel centers across Canada and the U.S., and while self-serve food areas have been closed – as well as all dining rooms – all pre-packaged food is still available for drivers to purchase, the chain has said.

“However, given the extreme and unprecedented nature of the Covid-19 pandemic, (FHWA) is choosing not to take remedial measures against states that allow food trucks to provide food in rest areas off the federally-funded Interstate right-of-way,” the agency said.

The move benefits not only truckers, with nothing to eat, but also food truck operators, with no one to feed.

“Our government is helping out our truck drivers who are keeping our supply chains running,” Premier Doug Ford said during his daily Covid-19 briefing March 24. “We’ll be keeping OnRoute locations, and other rest areas open so drivers can refuel, order take-out, and get a break.”

As restaurants closed dining areas and began taking drive-thru orders only, truckers found themselves left in the cold. Pictures on social media showed desperate truckers trying to maneuver their rigs through drive-thrus that weren’t designed to accommodate truck traffic. Others, approaching the drive-thru windows on foot, were turned away due to policies that prohibit restaurants from serving walk-in customers at the drive-thru window.

McDonald’s was the first fast food chain to come up with a customized ordering method for truck drivers. Truckers can use the My McD’s app to place their order, and select ‘curbside service.’ Drivers are asked to park their trucks in a designated area, enter the curbside stall number 99, and wait for a staff member to bring them their meal. The service, launched March 26, is available from 8 a.m.-8 p.m., in both the U.S. and Canada.

Canadian institution Tim Hortons also scrambled to appease truck drivers, after being widely criticized for shutting them out of washrooms and food service. On April 2, the company said it would open more than 400 locations along Canadian highways to truck drivers, providing counter access to food and drink services, as well as washrooms.

“Canada is relying on frontline essential workers to get us through the Covid-19 crisis and truck drivers play an integral role in keeping the country running. We salute them, we thank them for their tireless work,” said Tim Hortons Canada chief operating officer Mike Hancock. “We know there have been barriers for truck drivers in accessing clean washrooms and food and drinks to keep them going during their work. We made it a priority to address these issues and we continue to work on how we can better serve truck drivers and all guests.”

The company also said it’s working on a new curbside mobile ordering system for truck drivers and has been surprising trucking companies with visits from its snack- and coffee-filled mobile vans. AirTime Express in Mississauga, Ont., was one recent recipient of the gesture.

“Head office reached out to me and asked if they could deliver coffee and baked goods for our employees and drivers. Obviously, we said yes right away,” Monika MacAlpine, human resources manager, told Today’s Trucking.

MacAlpine and other staff took orders for drivers – including those from visiting outside carriers – and then also served the construction workers across the road. All food and coffee was given free of charge by Tim Hortons as a sign of appreciation for frontline transport workers.

“We would like to applaud and recognize McDonald’s Canada, Tim Hortons and the ever-growing list of smaller businesses for accommodating truck drivers during the pandemic,” said Jude Groves, director of safety and training with Rosenau Transport and chairman of the Alberta Motor Transport Association’s board of directors. “They have opened their doors and hearts to our industry, and offered us dignity in challenging times. We encourage all of our roadside partners to do the same.”

Rosenau Transport itself has been the benefactor of such generosity. Recently, local brewery The Canadian Brewhouse sent Rosenau’s Edmonton terminal meals and drinks for employees in appreciation for the work they’re doing.

“After hearing of some of the struggles the frontline drivers in our industry were experiencing, they reached out to put their skills to use and sent a meal over for the team working out of our Edmonton terminal and its network,” said company president, Ken Rosenau. “We are so grateful to have amazing businesses in the communities we serve around Western Canada.”

Further west, on April 4 a pilot project was launched to bring food trucks to cardlock locations frequented by truck drivers. The initiative was spearheaded by Kamloops, B.C., businessman Brad Wood, and advanced within the trucking industry by Greg Munden, president of B.C. log hauler Munden Ventures. 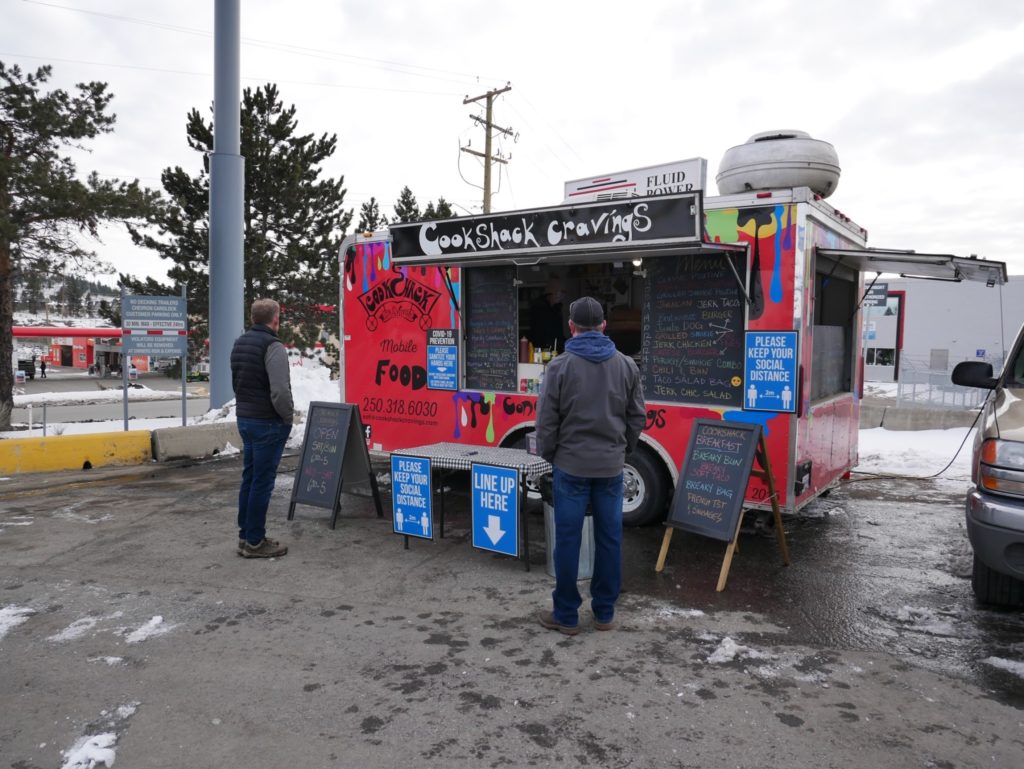 “While this originally started as a local initiative to address providing food to truck drivers in Kamloops, we have now involved the B.C. Trucking Association (BCTA) to help us coordinate a provincial rollout,” said Munden. “As well, I have been talking with the Canadian Trucking Alliance (CTA), which is interested in a possible national rollout based on our experience in getting this off the ground successfully.”

The first cardlocks to welcome food trucks were Chevron/Parkland locations in Kamloops, Chilliwack, and Abbotsford, B.C., with additional sites identified in Vernon, Kelowna, and Langley. Ocean Trailer was among the first to pick up the tab, committing $5,000 towards meals for truckers at the initial two food truck launches April 4-6 in Kamloops and Chilliwack, B.C.

“While this is a great opportunity to support the drivers who are delivering our essential goods, it is also a great opportunity to employ a lot of people in the food truck industry who would otherwise be facing a very bleak spring and summer seasons,” said Munden. “It is very important that we make this successful for the food truck vendors as well.”

Updates are available on the initiative’s Facebook page: Meals for Truck Drivers BC.

International dealer Bell International Trucks, a member of the Diamond Group, has been doling out free meals to truckers across Western Canada. Between April 1 and 5, about 3,000 meals were given out at various sites in Saskatoon, Sask., Edmonton, Alta., and Chilliwack, B.C.

And in Atlantic Canada, Irving Oil has been serving up free grab-and-go breakfasts for truckers visiting 17 Canadian locations (and four in the U.S.) between 6 and 11 a.m., as well as free showers with a fuel purchase. Circle K, Couche-Tard, and select dealer locations also gave truckers free coffee all day long at various locations.

Back in Windsor, Generations Diner has re-opened for take-out at its 1991 Ottawa St., location. But Knight and her daughter want to continue serving up free meals for truckers. They are taking donations via their Facebook page (search Generations Diner on Facebook) and the most urgent need is for a portapottie, so that volunteers can keep serving truckers at roadside. The diner currently has enough food to keep feeding truckers for another one to two weeks.

“We will keep it up as long as we can,” Knight said.