BLOOMINGTON, Ind. – The U.S. economy was rocked today by shocking numbers of 3.3 million people filing unemployment claims for the first time, but the worst is still to come for trucking.

“To put it in perspective, we were seeing somewhere in the neighborhood of 180,000 to 250,000 at any given point in time,” Eric Starks, CEO of industry forecaster FTR said on a webinar today, to discuss how the trucking industry will be impacted by the Covid-19 pandemic. “When we hit the peak in the Great Recession, we were north of 500,000, but we’ve never seen anything like this.” 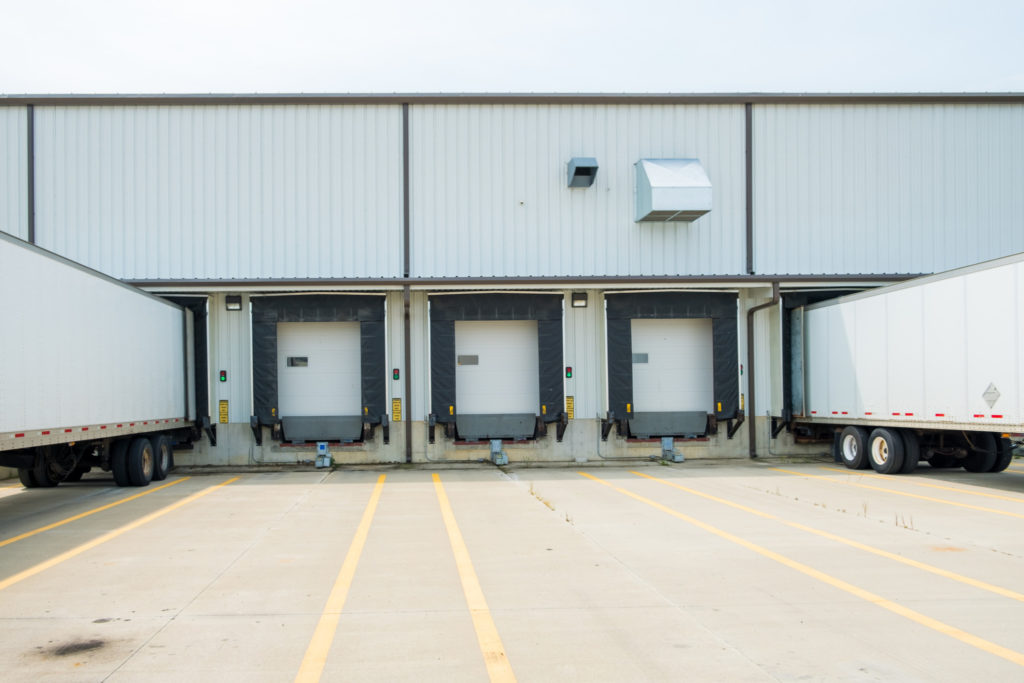 Industrial output is also expected to take it on the chin, falling nearly 15% in the second quarter, as factories are temporarily locked up to deal with the virus.

Starks said FTR doesn’t expect to see a noticeable rebound until the fourth quarter, and freight won’t return to the peak levels seen in 2019 until mid-2021.

“We are talking somewhere between a year, to a year-and-a-half recovery just to get back to the levels we were at in the first quarter of 2019,” Starks warned. “We are going to be having a very difficult time as we move through the summer. What we don’t know is how long does the virus stick around? All indications we see right now say this is not a quick turn.” 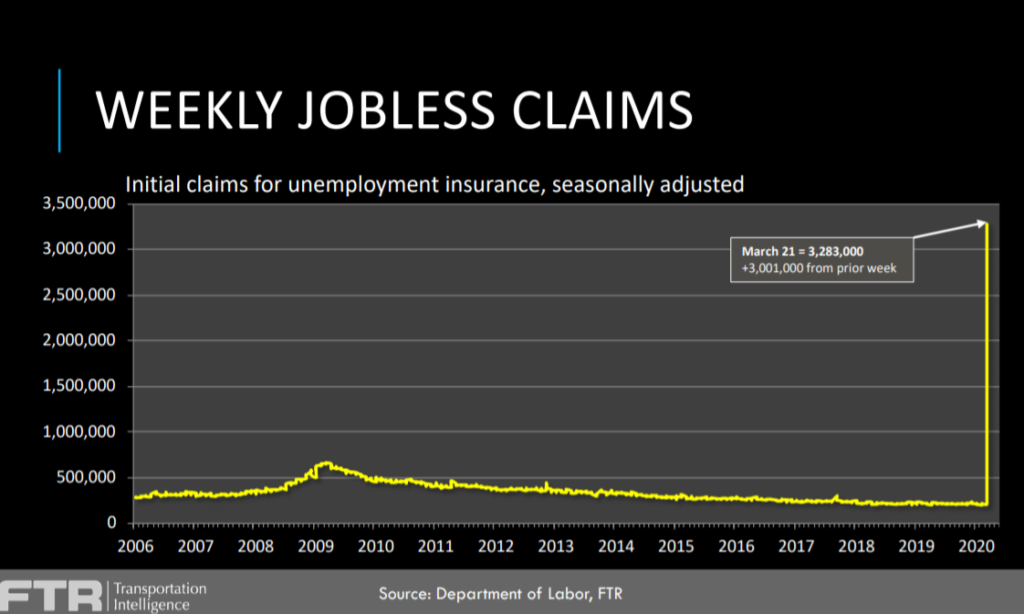 What’s in store for trucking providers?

“Trucking is going through something it has never experienced before,” said Avery Vise, FTR’s vice-president of trucking, likening the situation to a catastrophic hurricane, but one that is nationwide in scope and with no set end date.

So far, there have been some benefits to trucking. Refrigerated load availability spiked, and spot market rates for dry van and reefer loads moved sharply higher over the past couple weeks. But non-essential freight has already felt an impact, with flatbed and specialized load availability on the decline.

Vise predicted the retail restocking efforts driving a spike in dry van and reefer freight “could go away quickly.”

“The spot market itself may stay elevated for a while, but clearly overall freight volumes are going to begin to fade,” Vise warned, calling for overall truck loadings to decrease 4% this year compared to a pre-crisis prediction of a modest 1.3% gain.

Flatbed, bulk, and dump segments will be hit hardest, with loadings expected to decrease from 6-9%, barring an infrastructure bill that would kickstart construction. Refrigerated loads, however, should finish the year up slightly compared to 2019, FTR predicts.

“There will be people who will make more money on unemployment than at their jobs, especially in the near-term.”

Capacity utilization is likely to slide as drivers exit the industry. As available mileage dwindles and government supports workers with substantial payments, some drivers may opt to stay home, Vise noted.

“There will be people who will make more money on unemployment than at their jobs, especially in the near-term.” 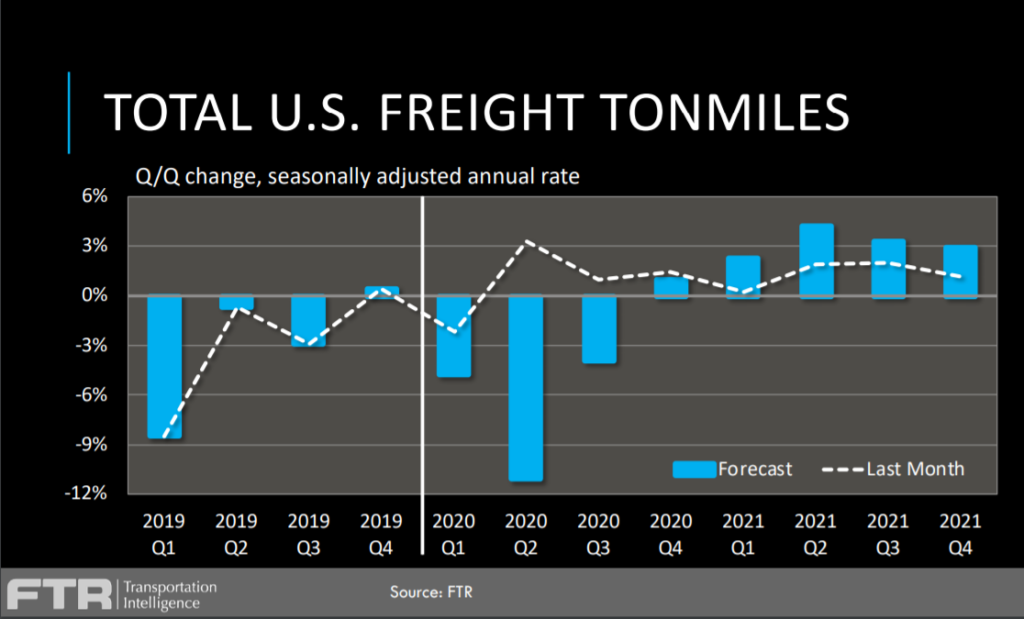 Carrier bankruptcies are likely to continue, but “We think the loss of freight demand will outpace the loss of capacity,” Vise said.

Underlying issues driving an increase in carrier bankruptcies before the crisis – such as rising insurance costs – are not likely to abate, putting further pressure on weak performers. FTR doesn’t expect the U.S. government bailout to significantly impact the freight picture, though it could mean consumers are in better shape to resume spending when the crisis passes.

“This is a rescue plan, not a stimulus plan,” Vise pointed out.

FTR’s forecast assumes consumer spending will drop for a period of time.

“When we look at what happened with the latest data out this morning, and seeing over three million people applying for (unemployment) benefits, that suggests there is additional downside pressure on our numbers in the second quarter,” Starks said. If companies are able to keep their workforces in place, the economy should rebound more quickly when the virus is contained.

The effect on equipment demand

FTR has reduced its equipment demand forecast to recession levels. It’s anticipating North American Class 8 production of 150,000 units this year, and predicts the second quarter will kick off the worst three months of Class 8 production seen since the Great Recession.

Its trailer production forecast has similarly been cut to 155,000 units, explained Don Ake, FTR’s vice-president, commercial vehicles. The medium-duty market is not immune to the downturn, either.

“We are looking for elevated cancellations in March, and we would expect order levels in the truck and trailer markets to be below 10,000 units at least for the next several months,” Ake said, noting fleets began showing “anxiety” about the impact of the virus through their ordering activity as early as late February.

OEMs may also struggle to get plants back up and running, following temporary closures over the past couple weeks, Ake cautioned.

“Two things are going to hurt them in the second quarter: a lack of orders to build, and also a disruption to society that’s going on,” Ake said, noting it may be difficult to get employees back on the job. “Another factor that comes into play is how well the supplier base can snap back. We’re not just talking about the U.S. supplier base, we’re talking worldwide. We have heard reports it’s been very difficult for a few weeks to get any supplies out of India.”

FTR has created a free online resource page for information on the Covid-19 virus and its impact on the transportation and freight markets. It can be visited at www.FTRintel.com/coronavirus. 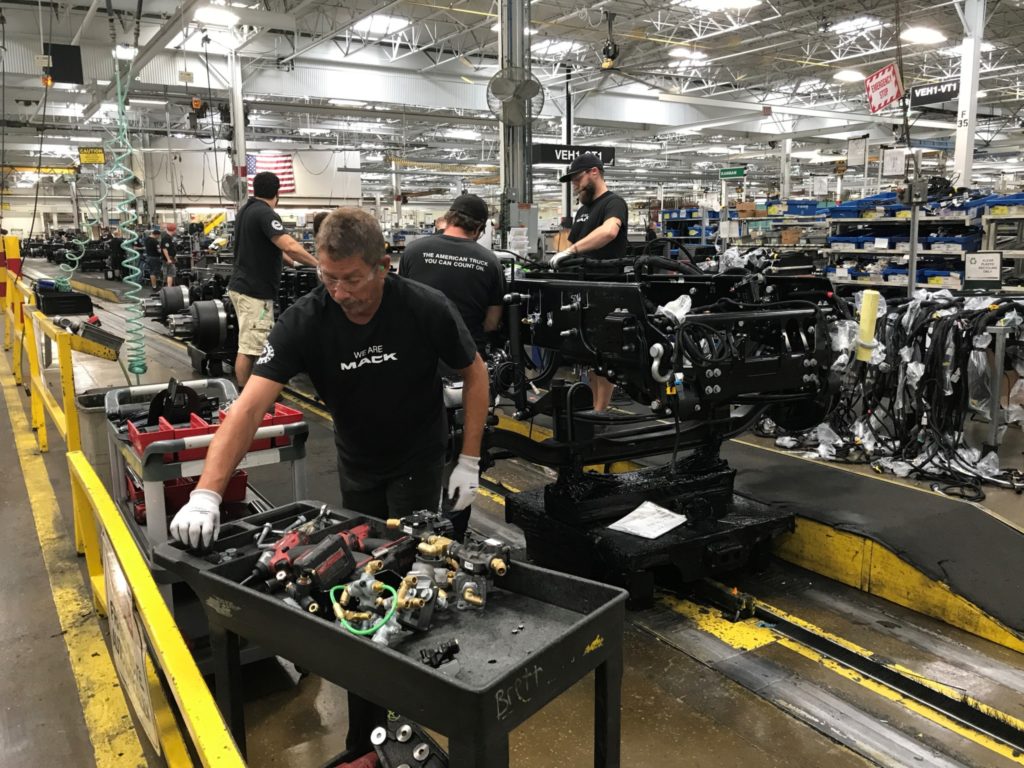